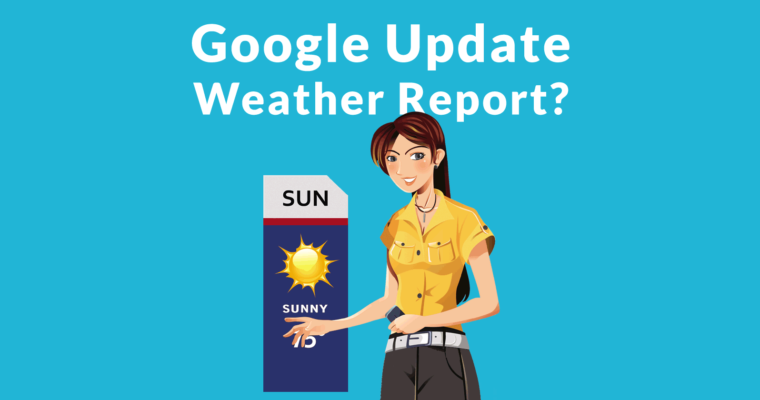 Almost every month the SEO industry insists that Google is updating its algorithm.  Google’s response is to maintain silence. On rare occasions someone from Google makes an informal or cryptic comment. Business owners panic. And panic sometimes leads them to find solutions to problems they may not have.

What I believe would be more helpful is an Algorithm Weather Report available in the Google Search Console. It does not need to offer specifics. It should simply offer reassurance.

All it has to say is that no update is happening beyond the daily tests and experiments that affect a minuscule percentage of users.  It can then offer that if you are seeing changes in your rankings, you may wish to visit Google’s Webmaster Guidelines.

I asked Simon Heseltine VP of Audience Growth, Trader Interactive, what his thoughts were about the value in an update weather report:

“It would really depend on the level of detail they’d release. While a “a change was released yesterday that impacted 7% of all US Searches” would be useful to let publishers perhaps help identify that it was Google moving things around that caused your traffic to shift that day, it wouldn’t help you figure out the why’s. But it’s more than we have now…”

Why Google Should Offer a Weather Report

A weather report fits into Google’s mission ” to organize the world’s information and make it universally accessible and useful. ”

Google lists multiple goals for  their Google Search Console, among them are these two goals:

A web publisher’s worst nightmare is to lose rankings in an algorithm update.  Should the web publisher rely on speculation about a phantom update?

Sometimes the reason a site loses rankings is because another site improved in a particular way. It could be the competitor has become popular and more users are discovering and loving it.

If a web publisher could rule out that an update happened, they would be better able to focus on their own content instead of chasing after a solution to an update that never happened. This is what Google’s Search Console is all about, as Google itself states:

Google Search Console is a free service offered by Google that helps you monitor and maintain your site’s presence in Google Search results.

Feedback from Google expressly insists that major updates happen less often than the search industry insists. Wouldn’t it be great if Google took the mystery out of this update hysteria? All Google would have to do is provide a Google Search Console weather report acknowledging that nothing  particularly important was happening.

The alternative is that web publishers operate in the monthly state of panic when some mistakenly insist an update has happened.

47 Experts on the 2019 SEO Trends That Really Matter
Structured data, exceptional content, and machine learning are among the most important SEO trends to know about in 2019. Get your free ebook to learn more.

Web Publishers Depend on Google for Information

On any given day Google does minor tests and might introduce a minor change. A generic weather update saying, “No updates today, just the regular daily tests. Enjoy your day!” would go a long way to shutting down the questionable cries of update that happen at the end of every month.

And when something interesting happens they could note that an “improvement to ranking is rolling out, it should affect x% of queries. Stay tuned for an announcement.” The stay tuned part could feature a link to Google SearchLiason.

Or if it was a spam catching improvement, Google could note, “Improvement to algorithm, should affect .xx% of search queries.”

This will help Google because more web publishers can know that something is happening and can provide helpful feedback to Google. If a publisher has lost rankings and checks the weather report and sees nothing is happening, this is an opportunity for Google to point that user to their guidelines and maybe even a checklist for guidelines about links, content, structured data and so on.

The Value in Knowing Nothing is Happening

Obviously Google wouldn’t want to share specific details. And the good thing about this idea is that details aren’t necessary. There is no need for details of what the change was.

Simply knowing that nothing unusual is happening is value enough.

The SEO community can use the information to better serve clients. SEO clients are a part of Google’s ecosystem, thus it’s in Google’s interest that they receive the best SEO advice.

It’s not in Google’s interest if the SEO community is raising flags about fake algorithm updates at Google. Keeping the SEO and publishing community in the dark only serves to perpetuate negative rumors about Google.